June 11, 2008 will be a day of record in the Canadian history books: the day of the formal apology by a prime minister for the residential school program sins committed against Native Canadians. Assembly of First Nations National Chief Phil Fontaine called it “the dawn of a new era in aboriginal relations with the rest of Canada”. Although I don’t disagree, I am now aware of a model of relations that existed prior to the birth of Canada’s confederation that seems to have been lost in our history.
Alright, everyone: Raise your hand if you know anything about Enmegahbowh?
Enmegahbowh is honoured on June 12 by our sister church south of the border. He was the first Native ‘American’ to be ordained as a priest. Born as a member of the Odawa band and raised as a Christian, he had a complete knowledge of his tribe’s traditional healing ways as he was intended to become a medicine man. He used this cross-cultural background successfully in founding missions, training other native Christian leaders and developing mission strategies and policies within the Episcopalian Church.
The story goes that Enmegahbowh, at one point, attempted to cross Lake Superior. One of the countless and infamous Lake Superior storms raged during this crossing. Enmegahbowh had a spiritual turning point during the storm, a Jonah experience. Instead of carrying on with his original intent, he returned to Minnesota and eventually founded the St. Columba mission at Gull Lake.
Rev. John Johnson Enmegahbowh was ordained by Bishop Henry Benjamin Whipple (at the right in the photo), the first bishop of Minnesota. Whipple was referred to as ‘Straight Tongue’ by the aboriginals in his diocese; a moniker justified by his actions. He was a straight-talking, hard-working, fair-minded and visionary leader. He was best 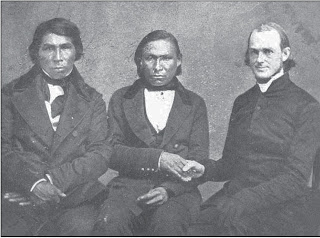 known for his dedication to the welfare of the Native people, a man who definitely walked his talk. His views were not welcomed by many in his diocese and several of his fellow bishops deemed him to be a fanatic. Whipple gave Enmegabowh (in the centre of the photo) special dispensation for the missing Greek and Hebrew education required for ordination. Enmegabowh had refused to learn these languages stating that he “was sent to work among the living, not among the dead”. Throughout their careers, these two men were in continuous dialogue about the state of affairs of the aboriginals in their care. Both men were committed to the service of their brothers, with radical colour-blindness.
It seems odd to me that Enmegahbowh is only considered a ‘saint’ by the Episcopal Church in America. He is not found in the Anglican Church of Canada’s ‘saint listing’. Should he be? Given that he was born at Rice Lake near Peterborough, the son of a chief of the Odawa (Ottawa) band of Ojibwa, makes me think that he is more ‘Native Canadian’ than the credited ‘Native American’ cited by the history books. When he attempted crossing Lake Superior, he was trying to get back to Sault Ste. Marie. He was ordained in the year that Canada became a country.
For the one hundredth anniversary of his death, the diocese of Minnesota commissioned an icon by indigenous artist Rev. Johnson Loud to commemorate Enmegahbowh. The translation of the Ojibwa name is “The man who stands by his people”. The icon contains two critical symbolic elements: fire – the catalyst for change, and a peace pipe; a powerful summation of the man’s life. At any rate, the prime minister’s formal apology was long overdue; maybe too is Enmegahbowh’s
‘Canadian sainthood’. And, maybe we should embrace the pureness of cultural relationships that was embodied by Bishop Whipple and the Rev. John Johnson Enmegahbowh, over one hundred years ago.
The Web Scribe
Posted by Web Scribe at 9:45 AM

Joyce, Enmegahbowh became a deacon in 1859 and a priest in 1867. So, our Henry Budd is the unqualified winner in the Anglican Communion. The Episcopalians are not exaggerating when they claim Enmegahbowh as the first Native Episcopalian priest.

I did check and Henry Budd is honoured in the Canadian Anglican calendar of saints on 2 April. I will do a blog on his feast day.

Most importantly, though...many thanks for the Canadian story!
Nicola

Hi Nicola: Can you tell me in what year John Enmegahbowh was ordained? It has long been held that Henry Budd was the first aboriginal to be ordained in the Anglican Communion in North America. He was made a deacon at Red River 22 December 1850 and ordained priest at Christ Church, The Pas, 10 June 1853. The Henry Budd School of Native Theology, at The Pas, is named for him. Allison Barnett Cowan and her husband served there, and the school's current director attended the Synod of the Diocese of Huron last month. I was among those fortunate enough to attend the graduation of the first three women from that school a number of years ago. The event was celebrated with a major scholarly symposium and one of the most impressing Eucharistic services I've ever attended. The Bishop of Brandon celebrated in Cree, and the native liturgical colours were featured, as was drumming. It was an experience I'll never forget. Joyce.

Much of your information about Enmegahbowh is erroneous. I have just finished writing an exhaustive biography of him and know him well!

He was ordained Deacon on July 3, 1859 by Missionary Bishop Jackson Kemper.

He was born to an Ojibwe band near Petersburg Quebec (but his father was an Ottawa who had joined his Ojibwe wife’s band). Enmegahbowh was first raised by ”heathen parents” (his words!), fully trained as a medicine man by his grandfather, and then the entire Ojibwe band was converted to Methodism.

Enmegahbowh then served as translator and missionary for the Methodists in Minnesota, and was ordained Methodist Deacon. In 1849 he was excommunicated by the Methodists (a white man had insulted his wife and he held the man down while she pummeled him). Around 1850 he met Fr. Gear (chaplain at the army post at Fort Snelling) and became an Episcopalian—converted by reading the Book of Common Prayer!

The photo is NOT of Bishop Whipple and Enmegahbowh is NOT in the center!. Left to right: Enmegahbowh. Chief Manitowab, the Rev. James Lloyd Breck (En-megahbowh’s mentor for whom he served as translator and who trained him for ordination.)