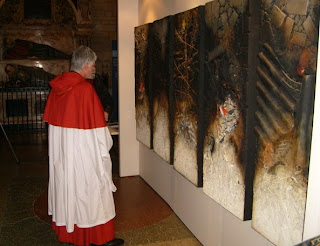 Henry Scott Tukes paintings are full of vibrant colour as they depict the play of light on landscape and the human body. They are mostly painted in and around Falmouth and last year Falmouth Art gallery in concert with other galleries put on exhibitions.

In one of the main rooms in the gallery during this exhibition featuring Tukes work was a darker piece. At first I didn’t want to look at it with its dark brooding colours and from a distance it looked impenetrable. It was my wife who made me look again rather than return to the vibrant attractive Tuke paintings all painted before the First World War.

But as I looked more closely at the dark panels details emerged, these details were fragments of ordinary life, the smashed computer, the broken crockery, the teddy bear amongst scattered spoons, the broken 78 record semi covered by broken brick and corrugated iron.

It was the detail that drew me in, resonated with memory- memories relayed by relatives from two world wars- they spoke not of battles or great movements and meaning but vapour trails over south east England, or a broken leg as one emerged from the observer’s seat in a WW1 aircraft which had crashed into a railway embankment.
It’s in the details of life that joy and sorrow are experienced, the fractured frame or the fragrance of the rose, the sounds of a song.

These details were in this work by Roy Ray and the bigger picture emerged as each panel revealed through the details its ghastly meaning. Looking at the broken computers unleashed images of clerks and secretaries making the familiar sounds of tapping keys before bright screens as passenger aircraft ripped open walls and their lives.

We Christians are at the beginning of Lent, our major fasting season and season of preparation for Easter. Now we concentrate on details, fragments of life, what we eat and drink, service to the poor, the use of time. We are encouraged to understand that it is in the fragments and details of our lives that we truly see ourselves, we truly hear the judgements we make of neighbour, and we truly feel the need for our will to succeed. Jesus often talks of these details in simple terms- to whom did you give a cup of water? Who do you judge? Do you visit prisoners? Love your neighbour- the very person next to you; love even someone across a national or religious boundary like a Samaritan. It’s in the details that we know the reality of Jesus life in ours. As the tree is shaken what kind of fruit drops down? Roy's painting here in the Cathedral reminds us to keep on looking at the details of life, and from there to a bigger picture. 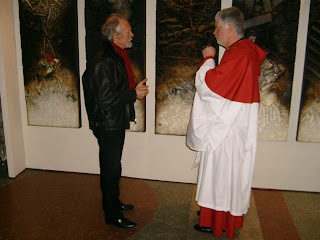 These panels show us the details of city life smashed. The city- places where most people live. The city, the place of abundance, art, life, security and future. Cities have resources and cities typify our human aspirations where no longer determined by soil and season alone we can explore other ways of being human. Greeks, Romans, Byzantines, Parisians, Londoners, New Yorkers will all know this. For Jews and Christians this is all summed up in the city Jerusalem, as a metaphor, a hope an aspiration. In Roy’s painting the City, the place of hope and aspiration is pulled down fragmented by human violence and envy, by distorted religion feeding off of violence and poverty.

The destruction of the City doesn’t suddenly come from nowhere- it comes from the build up of detailed actions and thoughts. WW2 emerged from so many small factors including the 33% of the German people who marked with a pencil a cross on a piece of paper at an election. London’s bombing in 2005 was made up of detailed decisions and actions going back years.

But it is in the city where the details gather and finally pull down and break not just details but big pictures and patterns. The patterns of aspiration and hope, vision. The London bombings of 2005 shook our dreams of multiculturism and liberty, New York broke for a time the American ideals with Guantanamo Bay, the Blitz even led us to fire bomb Dresden with the loss of 30000 plus lives.

(Tuke painted before the cataclysm of WW1 Roy Ray born in 1936 inherits the memories and knows the broken dreams of the 20th Century. It was a stroke of genius to have his work alongside Tukes in Falmouth Art Gallery. It created an unexpected balance. )

On Good Friday a big picture is painted. The fragments and details come together in destroying through betrayal, politics, mis- aimed religion. The big picture and pattern which is destroyed is something thrown out of the city- without the City Wall. It is the life of the God bearing human Jesus of Nazareth. The hopes and aspirations of many hang broken and destroyed. All the details bubble and push until their final end is the death of beauty, mystery goodness and hope.

The Choir has sung about this- Salvator Mundi- O saviour of the World… Roy’s painting also points not directly to Christ on the Cross but upwards to how all the details make a bigger picture, how the details reveal both the effects of violence and the cause.

At the end of this service as we process out the choir are going to sing near Roy’s panels William Byrd’s Anthem: “Civitas sancti tui” by William Byrd.

Scholars suggest that Byrd was thinking metaphorically of the demise of the Catholic Church in England when he chose this text about the desolation of Jerusalem. His hopes and aspirations fallen, his life’s inspiration snuffed out.
The words are:

As you hear these words, these fragments of sound you might like to pray for all who have lost their Jerusalems, their hope, their vision. You might like to consider as you look at Roy’s work the details of your life this Lent. You might like to trace how those details of belief and behaviour can lead to the destruction of beauty, love, hope in the body of Jesus Christ hung outside the City Wall.
Prayers. Artists, scientists, politicians, musicians. Cities, Ausw. Rick Rescorla RIP- Cornish who saved so many lives.

2 And I saw the holy city, new Jerusalem, coming down out of heaven from God, made ready as a bride adorned for her husband. 3 And I heard a loud voice from the throne, saying, “See, the home of God is among mortals, He will dwell with them, and they will be His peoples, and God Himself will be with them, 4 and He will wipe away every tear from their eyes; death will be no more;; mourning, or crying, or pain will be no more, for the first things have passed away.” 5 And He who sits on the throne said, “See, I am making all things new.”