Mom’s mantra: ‘we’re going to clean out the basement – this year’. Somewhere between bridge clubs and borders (both gardens and guarded – the international type) in my memories of my mother’s favoured obsessions, sat this phrase, usually uttered after a protracted search for some item or other that had been lost to this heart of darkness of my childhood home. So one can imagine the angst that began to swell when these self-same words surfaced early January (this year – not circa 1956) with a targeted completion date of December 31, 2010. The chill deepened as crosshairs locked onto kitchen renos attended by the equally scary: ‘so what’s my budget?’ I needn’t have worried (well maybe just a little) wed to both an accountant (read sharp pencil) and an Ikea devoté (read not custom-designed). And so the steady march toward the Guinness Book (and beer!) for ‘most drawers in a single kitchen by a non-commercial customer’ (as awarded by Len, our Irish installer – whose day job merely provided opportunity to test drive his latest stand-up routines). We did, however, finish second in the puck light competition, ceded to our neighbours, equipped (in the ever-hyperbolic words of our shared electrician, Roger) sufficient to preclude the need for a cook top: “just set those strip loins on the island and turn the pot lights to broil”. So with Magnus (the Viking – range, not the Scandinavian) and faithful companion, Thor (the exhaust fan during whose initial fire up we’d been warned, by Roger of course, to remove small dogs and children from the immediate vicinity – lest they find their way airborne toward Shakespeare), we christened the new laboratory for Nicola. 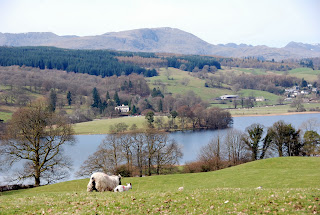 Who could resist the siren call of Mrs. Tiggy-Winkle and Benjamin Bunny? Clearly not us. Early April, when the UK was bracing for its final blast of inclemency (we had snow while Perth County was sunning itself in 26˚ C temps), found us in the Lake District’s Beatrix Potter country and Chester’s cathedral for Holy Week. Simon, wrapping up his stint as organ scholar, was beginning to cast his eyes colony-ward for future prospects (more of that later); doing yeoman’s service as local guide. For better or worse, we were left to our own orienteering devices for the balance of the trip, doing our best imitation of Heathcliff and Catherine slogging about the glorious landscapes of the Peak District from our base in a little stone cottage in Cheshire. Walk ratings of ‘easy to moderate’ are so much sheep dip (of which there was certainly no shortage either!). 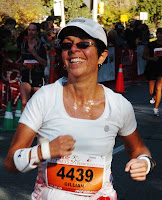 All illusions of father-daughter idylls, crossing the finish line together, clasped hands raised high in personal victory have now dissolved, the ephemeral vestige of an aging man’s dream world. The writing was on the asphalt at this year’s New Year’s Eve run – a modest 5-, or 10- for the hardier, kilometer ‘fun run’ that ushered in 2010 (and by the time dad coasted into the finish paddock, we were well into 2010). Left in the slush, as training for Jill built to a half-marathon and ultimately to a first full 26 miler (in the old tongue) in September on a sunny Sunday in Toronto accompanied by 3,000 or so of her closest friends. 4:01:53, a whisker from the 4-hour goal and incentive to push all the harder in 2011. Even the 'race photographer' status has been surrendered: Brant is now the official -- with his credentials becoming better established as I write. First film screened in November this year.

So what’s a body to do – but find an alternate sport. Hmmm? Skydiving, wind surfing, rock climbing – surely all within the grasp of this now 64 year old (well, only if I use my right hand, grip strength having flagged considerably on the non-preferred side!) Perhaps not. Ah, something sensible, even familiar: like bicycling – and there were six of these things hanging, bat-like from the basement rafters already. So after the RBG garden tour commitments were safely satisfied and we had our yard to ourselves once again; and after the angst of a bus load of blue hairs, armed with notebooks and an ample supply of obscure botanical questions (necessitating the usual ‘oh, that must be the other rodgersia pinnata, native to southern China – they are so easily confused’), Provence appeared on the radar. Six glorious days of cycling up hill and down (the French have this oddly understated definition of what constitutes a ‘hill’ – something to do with category 1 or ‘beyond classification’ . . .or something) from Nimes to Aix, and as many four- and five-course dinners in between as one could stuff into those already stressed spandex shorts. The 70 kph Mistral aside (well really from all sides!) – defined by Mr. Wiki as ‘the strong, cold and usually dry regional wind in France, coming from the north or northwest, which accelerates when it passes through the valley of the Rhone river’ (where we

just happened to be); and the ‘slide into second base’ along several feet of asphalt (after the fender wedged in the back spokes) notwithstanding (which I certainly wasn’t – along with a good part of thigh, calf, knee, and shoulder epidermis) on a descent (much too cavalierly) from Les Baux, all was sunny and worth every drop of the IV antibiotics on return home. It must have been all that good Cotes du Rhone medicine that forestalled the pain.

And so to the prodigal – nope, make that prodigy – son. Quite a year for Andrew. After four hugely formative and supportive years at St. Mary Magdalene in

Toronto, the opportunity – and what an opportunity it was – to move over to St. James’ Cathedral surfaced in early May as assistant organist. Two months into the gig and he’s playing for no less a parishioner than the Queen herself. Never sure where the ‘ice water in the veins’ comes from in musicians – but nary a mis-note. With some comings and goings amongst personnel, the ‘assistant’ has been replaced with ‘interim’ and the ‘organist’ morphed into ‘director of music’. Not bad for 23 and counting. Not surprisingly sights have shifted to Canadian opportunities from the hoped move to the UK. Even a little 2nd British invasion, with longtime friend and fellow organist, Simon arriving to cultivate a future in the colonies.

As for the basement: cleaned out, revisioned as sewing room and exercise centre and with storage that would have Martha Stewart turning green (that would be with envy, not environmental sensitivity). And it’s only December 7th!

Nicola, David, Jill, Brant, Andrew, Simon, Martha, Oban, Morag, and Charlie (and any blue hairs who couldn’t find their way out of the backyard).