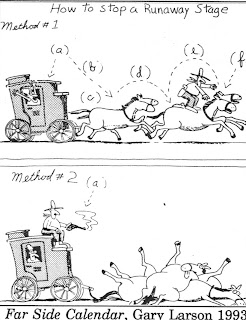 Noon time run just commenced, I trot easily along a little-used stretch of road beside the river. An easy hello from an acquaintance heading home for lunch. Heaving into sight behind and approaching, four adolescent boys strung loosely abreast, across the road, Chicago Bulls hats twisted brim-to-rear, Raiders jackets unzipped, and soggy runners on foot in lieu of discarded winter boots. Familiar as I am with the verbal jibes tossed my way by members of this set, I discount the too-loud remarks about the “string bean”, and carry on running, hard against the left shoulder of the street.

Five feet separates us now. Adjacent-most lad, apparently not yet fully exorcised of his feelings toward approaching runner, jumps sideways into my path, menaces briefly, and then back — but sufficient only to allow the narrowest of passage between his bulk and the snow bank. . .

TIME OUT FOR CONSIDERATION OF ETHICAL DILEMMA: My socialized, therapist side would dictate, slowing, drawing the lad aside — perhaps offering a seat on the nearest available park bench. Reflect to him my awareness that his behaviour confirmed a need to act out against adult authority, to challenge a symbol of the world he wished to define himself as distinct from, and to elevate his status amongst his peers. To point out my feelings and the impact of his actions on another human being. To suggest alternate ways of connecting with me, should we meet again under similar circumstances. (This would be method # 1: six, beautifully orchestrated steps to resolving conflict between the adult and adolescent sphere.)

OR. . . It was so easy. Good forward momentum; accessible target; exaggerate that arm swing just a bit and BAM — right fist planted in solar plexus without even breaking stride. From behind, I pick up the reaction: "The ______ hit me!" Carry on running. Some fifty feet apart and perceived as a safe distance away, the expletives begin to float my way. I turn and begin to trot after the group. Two break for cover. A third, turns toward me — to challenge; to delay so his friends might escape. No. As it turns out he merely wanted confirmation that his friend hadn't hallucinated the whole encounter.

"You ain't gonna hit me are ya?" "No", I reassured, placing my hands on his shoulders; "I'll just show you what your buddy did." "Oh, he said you punched him." "Well, if his running into my hand as we passed constitutes a punch, I suppose he's right. See ya." Sometimes, to enhance personal growth and awareness — you just gotta use Method # 2!
Excerpt from an anonymous runner’s journal, Winter, 1994

I’ve pretty much passed the torch to my daughter – at least where Mercury’s winged feet are concerned. I must say, I don’t really miss suiting up for a 25 kilometer run on a cold and windy Sunday morning in February (or the adolescent confrontations). But while the obsessive commitment and discipline may have downshifted a generation, some of the sidebars continue to linger. In particular, as I look back, what seems to have stuck around is the (obstinate) arrogance and entitlement that comes with facing the elements (human or meteorological) equipped with little more than a pair of running shoes and the flimsiest of clothing – while all those slugs, bundled to the nine’s, insist on driving down ‘my road’ and pushing aside this hero of winter. And with it, the ludicrous ‘mouse that roared’ standoffs between a near-naked, 135 pound runner and a significantly better equipped automobile, complete with pissed off driver at the wheel. Many’s the time where the mouse’s roar consisted of the first few letters of the ‘Jersey alphabet’ – effin A, effin B, and effin C – phonetically speaking, complete with the Canadian sign language equivalents. Age seems not to have diminished some things – good old fashioned, knee-jerk reactivity to the challenge. ‘Road rage’ to be sure.

So what’s to be done? Another excerpt, in a more somber vein, this time from a letter to the Beacon Herald from some friends and responsive to the ‘calls for his head’ following the killing of one of Stratford’s swans; the public need for extreme consequation:

We wonder if it might be timely and helpful for all of us to take a few, slow, deep breaths and reflect on our reactions to swan Angela's death. It is appropriate and natural for us to feel pro­found grief over the horrific death of a beautiful mother, and our accompanying anger at the "sad cruelty" that was directed at her is also normal. It is further reasonable that we would hope that the perpetrator(s) would be found and held accountable for what happened. However, we are concerned about the vindictiveness that is being expressed against those responsible. Calls for public humiliation and ruthless punishment only serve to place us all in a similar role of inflicting cruelty — that which we claim to be denouncing.

On reading, I was reminded of the little ‘pause button’ so much a part of our ubiquitous, electronic gadgetry. The symbol, of course, is that of two, short, vertical, parallel lines – with a convenient and appropriate space between. Quite unlike the ‘play’ or the ‘fast forward’ buttons – that compel us to ‘get on with it’ – it seems to suggest a space to ‘pause’ and reflect; to pause and reconsider; not unlike the writers’ plea above.

They continue:
Further, might we gain a different perspective if we asked ourselves: what if the perpetrator were my child? My brother? My friend? What would best serve him in learning and moving on from this event? We wonder what suggestions we would come up with then.

Several possibilities are offered as to how we might conduct ourselves – as we spend that brief moment ‘between the lines’:
Take some time to develop a different perspective (the child, brother, friend vs. faceless villain view). Karen Armstrong, in the opening chapter of her Twelve Steps to a Compassionate Life, comments on the universality of the ‘Golden Rule’, common to all faith structures and attributed in its origin to Confucius as the constant guide that informs one’s daily conduct: ‘All day, every day, never do to others what you would not like them to do to you’ (aka, empathy).
Or we could collect data, understanding of the circumstance, the individual before acting. Further, Zindel Segal (The Mindful Way Through Depression) encourages us to consider alternatives: “Acceptance or allowing (vs. action), as a vital first step, lets us be­come fully aware of issues, and then, if appropriate, to respond in a skillful way of addressing these issues -- rather than to react in knee-jerk fashion, by automatically running off some of our old (often unhelpful) strategies” – what an acquaintance calls ‘sitting with. . .’ versus ‘acting on’. Resisting the view that, when one is ‘inactive’, one is condoning, endorsing a situation; rather than simply reflecting on it.
And finally, Breathing. As the letter suggests, ‘let’s take a few, slow, deep breaths. . . ‘ Again, Segal offers a variant on this common ‘pause button’. He calls it the ‘three-minute breathing space’; the A, B, C’s (not from New Jersey this time!):
A - Awareness. Observe – bring the focus of awareness to your inner experience and notice what is happening in your thoughts, feelings, and bodily sensations. Describe, acknowledge, identify – put experiences into words; for example, say in your mind: “A feeling of anger is arising” or “Self-critical thoughts are here.”
B – Breathe. Redirecting your Attention. Gently redirect your full attention to the breath. Follow the breath all the way in and all the way out. Try noticing, at the back of your mind, “Breathing in . . . Breathing out”; or counting, “Inhaling, one . . . exhaling, one. . . inhaling, two. . .exhaling, two. . .etc.”.
C – Connect, in a Considered way. Allow your attention to expand to the whole body – especially to any sense of discomfort, tension, or resistance. If these sensations are there, then take your awareness there by ‘breathing into them’ on the in-breath. Then, breathe out from those sensations, softening and opening with the out-breath. Say to yourself on the out-breath, “It’s OK. Whatever it is, it’s OK. Let me feel it”. Become aware of and adjust your posture and facial expression. As best you can, bring this expanded awareness to the next moments of your day.

So the space between the lines is as much about bringing intention to our behaviour; informing our actions before doing, versus the automatic ‘knee jerk’ (hmmm, jerk?) I suppose there is a time for Method #2 – at least that anonymous runner considered his choices. . . I suppose.
Posted by David Howard at 8:08 AM