Once You Learn, You Never Forget

I have the sense that bicycle metaphors may hold preeminence for a bit. Sleek and streamlined, narrow-tired, aero-rimmed, the touring bike with which I was about to spend more of my time than with any human being for the next two weeks leaned casually against a corridor wall in Manchester Airport – ready for action. Unencumbered, it was a thing of beauty. Then the ‘encumbering’ began. First the rack that would hold panniers away from the spokes of the rear wheel – and hopefully contain all the ‘stuff’ I would require for this fortnight. Then the brackets for the ‘hungry-man’ sized handlebar bag. Followed by the mount for what some, less well-prepared acquaintances have dismissed as David’s wide screen TV; aka, my GPS that would guide me to those remote B & B’s in the Yorkshire Dales (missing a turn in a car is one thing; 10 kilometers out of one’s way on a bicycle can be, shall we say, a little more frustrating). Frame pump, under-saddle tool bag, water bottle, waterproof pannier covers, front and rear lights – and the kitting out was complete. I gingerly mounted, deluding myself that I could cycle my way out of the bowels of the airport, only to find that my responsive, light-weight, and ‘balanced’ bike had metamorphosed into an awkward, unpredictable, finicky, and decidedly burdened semblance of its former self; mirroring even the most insignificant departures from a perfect perpendicular with the front wheel twisting sideways on itself and the whole unit ready to collapse in a heap with any lapse in the rider’s attention. I was immediately reminded of accounts of Arthurian knights’ steeds caving under the weight of their own ‘protective’ armour.

A second image, also cycle-based but from a much earlier stage, is that of my first two-wheeler presented me by parents as a birthday gift on one of those rare early November days when southern Ontario was blessed with a significant snow fall. Unable to engage the usual father-son ritual of having the former run along clutching the underside of saddle to support and maintain the upright latter unit of son on wobbly bike, I had to content myself using the fridge as father-surrogate as I rocked to and fro in our kitchen, making first attempts at balancing this creature that seemed (not unlike the loaded unit in the airport) more intent on falling over than on remaining vertical. (I really do need to stop biking indoors!)

Either way, balance is a tricky, elusive thing. For the perhaps six-year old David, there was not yet the intuitive ‘once you learn it, you never forget it’ skill that allows dad to let go the seat, the training wheels to come off – or, in this auspicious beginning, the fridge to be abandoned for more free-wheeling days. Six decades later, the intuition might well be in place, but the compulsion to sabotage it with ‘stuff’ – all very essential, but clutter nonetheless – had crept in to undermine. Trust (that inner instinct that is just there – very hard to ‘tell’ someone how to ride a bike) and simplicity: the casualties that are often reflected in an ‘unbalanced’ life. In the case of the former, the more we attend to our ‘riding’ (“how am I doing, Dad?”), the more wobbly we become; in the latter, the more we surround ourselves with the ‘reassuring encumbrances’, the less we are free to attend to the ease and effortlessness of moving through our space. 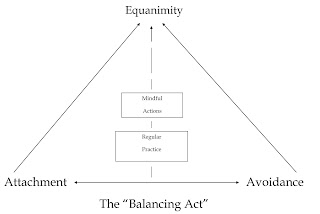 A few thoughts on what we might do to restore balance. If we consider our subtle ‘vertical’ as some hypothetical mid-point between attachment (those aspects of our life without which we would surely perish) and avoidance (the other end of this continuum wherein reside all those things that, to which were we to be exposed, we would surely perish), then we might be getting a little closer to riding that unencumbered beauty, uphill and down with equal joy. This allows us to position ourselves along the horizontal dimension somewhere between our two ‘extremes’. I had read an instructive midrash (a Hebrew ‘teaching story’) that characterizes these end-points as two cliffs between which one is sailing; perched atop one cliff is one of a pair of characteristics and atop the other, its opposite. Examples might be generosity and stinginess, patience and impatience, impulsivity and procrastination. The task, in retaining / regaining our balance is to first be mindful of what sits on our ‘right’ and ‘left’; secondly, to steer a course between – taking care not to pass too closely to one rocky wall or the other; and thirdly, to resist judging either as inherently good (becoming too attached to it) or bad (avoiding it). A fourth aspect is that of ‘subtlety’ – taking care that our ‘course corrections’ do not represent overly aggressive, ‘over-compensations’ (recall what happens when riding that ‘balanced bike’ when one jerks the handlebars too radically; better to subtly lean in one direction or another – if one is to stay uprigtht!)

Mindfulness practice introduces an additional element that ‘elevates’ us above that horizontal: equanimity; essentially allows us to hover above, rather than simply bouncing back and forth between. Equanimity is seen as a state of mental or emotional stability or composure arising from a deep awareness and acceptance of the present moment. I like a few aspects of this definition. First, stability (in keeping with our mindful cyclist) – keeping upright, balanced and to the middle road, as it were. Secondly, composure; avoiding radical ‘corrections’, pausing and considering a situation before reacting (although that child on the bike path coming into York on that sunny, dog- and child-filled Sunday afternoon did require a tad of ‘act first, think later’ intervention!) And finally, acceptance of. . . beyond an awareness of our ‘two walls’, an allowing of what sits atop them.

Both my bike and I came to accept the ‘middle ground’ between the unburdened ‘lightness of being’ (envied in those that, on occasion passed me peddling up some quite unbelievable hills – as I pushed mine to the top) and the prospects of wearing the same pair of shorts for two weeks as I wandered, totally lost across the North Yorkshire moors. I still had that tail wind and the privilege of sailing down the other side.
Posted by David Howard at 2:32 PM