There’s an oft-repeated story, attributed to Thich Nhat Hanh, the founder of Plum Village, a Buddhist retreat centre near Paris:

Each year, as applications for continued participation in this community were being reviewed, the question would arise as to why one particular individual would be invited to return. This man was notoriously challenging, difficult to get along with, and generally undermining to the values and teachings of the centre. Each year Thich Nhat Hanh would patiently listen to the near universal entreaties to bar this individual from membership; and each year he would approve his continued association. When pressed to explain his reasons, his answer was simple. This man provides a focus for the centre. His actions are so outrageous that he cannot help but be noticed by all. And none of you has yet learned to be in his presence without having him distract you from your own reflections and study. Only when you have learned his lesson, will we consider your request to bar him (and then we won't need to). He is your ‘best teacher’.

The community members were merely acting out the very human response to a situation or individual that made them uncomfortable, angry, frustrated: avoidance – or at least a request that the community’s leader would ‘remove’ the challenge and restore order and peace. The belief, of course is that by excising the problem, the issue is resolved. Thich Nhat Hanh was underscoring the reality – ‘until the next time’. Better, even necessary, to cultivate a capacity to deal with these emotions within ourselves than to spend our days trying to remove the external source of them.


With Karmic predictability and relentlessness, these ‘opportunities’ enter and re-enter our personal theatre – until we get it right. (Maybe it’s time to watch Groundhog Day – yet again!) The range of response is also predictable (although somewhat specific to the individual). For me, the sequence usually starts with a rant, typically rationalized and washed through the lens of feeling betrayed or disappointed. (I’m entitled to rant because I’ve been . . . or so the opening act generally goes). Truth be told, it’s usually more about the order of things, my order of things, being disturbed (often unexpectedly). Then the parent appears – usually daddy – and his need (delusion?) that order can and must be restored – whether through civilized negotiation, gentle correction, or arbitrary mandate. This stage of course is heavily reliant on my having sufficient control of outcomes to be conciliatory, didactic, or arbitrary. Either way, the operative term is ‘control’; and its flip side, ‘helplessness’. And then we move to angst – what if. . ? If the tantrum doesn’t do it, dickering and/or pronouncement doesn’t do it. . . then what? Concern, anxiety about the future. Quite a lot to learn from one ‘teacher’!


So what’s to be done? In an earlier blog (May 9, 2011) on projection and how to address it mindfully, I’d recounted Zindel Segal’s suggested protocol: developing an awareness of the present experience – taking our attention away from the ‘trigger’ event or individual and shifting it to our own experience (what am I feeling?); identifying the way in which we’re relating to the event (attaching, avoiding, etc.); letting go of our need to make things different than they are (accepting, allowing); and finally, inviting the experience to remain, understanding that it will change, evolve – all things do and in their own fashion. 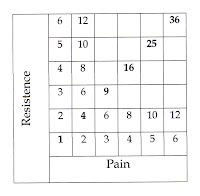 At lunch with a friend this week, we began to discuss the relationship between physical pain and levels of discomfort or, in many cases, literal suffering that result. As Shinzen Young, a widely respected meditation teacher, frames it, pain exists along one dimension of our experience; and our resistance to it (in simplistic terms, our effort to avoid it, deny it, medicate it, operate on it, etc. – in essence, the degree to which we push against it) along a second dimension. He describes the subjective experience of pain, our suffering, as the product of our ‘objective pain’ and our resistance – or the amount of the first multiplied by the amount of the second. So, as we experience greater levels of pain, our subjective experience of that pain is magnified exponentially by the level of resistance we bring into the equation as well. In the diagram, a six-fold increase in pain, accompanied by a similar increase in resistance, produces a subjective pain level, not of six, but of 36! His contention is that, a regular mindfulness practice, by bringing increased levels of clarity and acceptance to our physical experience, is able to address the dimension of resistance – in essence containing that part of the equation over which we have some control. While we can’t, in many cases, limit, reduce, and certainly not remove the pain, we can definitely impact our level of subjective suffering by lowering our resistance (increasing our acceptance).


Conversation turned to dealing with challenging people (teachers, as it were), and it occurred to me that a very similar model had application. Our Plum Village populace, courtesy of their ‘dictatorial’ leader, was not able to address their resident ‘pain’. He was there for the duration – suck it up, buttercup! What they were most certainly able to do was to limit the level of reactivity (resistance) to this man. The resultant distraction (i.e., suffering, in Shinzen Young’s model) was able to be contained, hopefully sufficient to allow them to carry on with their own lives without having this man continuing to be the ‘tail that wagged their dogs’. Similarly, if I examine my personal response to ‘teachers’, my anger (the initial tantrum), my efforts to restore ‘equilibrium’ (my equilibrium) / control / order, and ultimately my anxiety over where things will head from here, all represent resistance in various guises to accepting what is, to sitting with an individual over whose decisions I have (and probably shouldn’t have) much say, much as I’d like to. A pain, perhaps. My choice as to whether I want a 6 or a 36!
Posted by David Howard at 7:11 PM