What Were They Thinking??

Mindless! This, the opening to a homily at Toronto’s St. James’ Cathedral, in reference to the days of violent rioting in London, England this past week. As is often the case, the making of some sense of catastrophic events, particularly those authored by other human beings (but even natural events get those evangelicals’ tongues a-wagging and fingers a-pointing!) becomes paramount – and with this (pseudo) understanding, just as often comes the offering of a ‘cure’. In the case of the homily, it appears that the roots of this mindless behaviour are traceable to a loss of one’s religious bearings; and, by extension, the cure lies in ‘getting the good word out’ to those lost souls (sounds like evangelizing to me). I’m not sure it’s just quite that simple (on counts of either cause or cure). 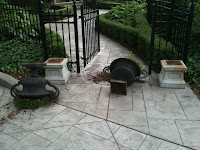 Saturday morning greeted Nicola and I with a tableau wildly less ruinous, mercifully, than the one pictured above – but nonetheless very disturbing. And reminding us, yet again, of that very fine line that sometimes blurs sufficient to allow us residents of comfortable Canada in secure Stratford to be touched by events, if not of scale and devastation, at least of similar etiological seed. Mindless behaviour.

I’ll not quibble with the Dean’s (homilist at St. James’) points. In my experience of him, he is a courageous and articulate speaker, a tolerant, inclusive, and socially sensitive observer, and a deep thinker. But he has a job to do and a context within which to do it. Nevertheless, seven additional considerations – which, together with God (or more properly, the loss of touch with same), bring our tally to eight, possibly causal, almost definitely contributing elements underpinning this mindlessness.

As with England, so with Stratford: age, stage and content of values acquisition, a sense 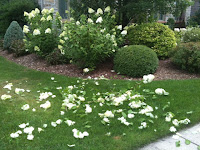 of (pseudo) power (however transitory and pointless) against an abiding backdrop of felt powerlessness, an alienation and separation from (and with it, a marginalization), frank numbers (of bodies), impulsivity (and its primary catalyst, substance), and finally the capability to communicate (one’s actions) in word and picture to widespread numbers of like-minded, like-situated, but perhaps geographically remote peers.

The analysis of England’s riots (principally taking place in London and Manchester) seemed all the more challenging in the absence of any ‘reason’. Flashpoints were identified – but seemed quite insufficient to explain the devastation that followed. Large numbers of mainly teenaged rioters seemed intent on trashing the neighbourhoods in which they lived, with no particular motivation (political, social, racial, etc.) other than ‘everybody’s doin’ it (doin’ it, doin’ it) – so let’s go! It seems just a little precious to compare the UK’s widespread destruction with objectively trivial vandalism. But perhaps easier to understand on the smaller, local scale.

We happen to live on a well-trodden block, midway between point ‘B’ (that would be probable destination of said vandals) and point ‘A’ (the bars). Over the day on Saturday, one or both of us had opportunity to ‘retrace’ the path: the destroyed flowers of our neighbours (above), the smashed urn of a resident along the river (at right), and finally the vandalized garden of another homeowner, living at the corner, as one staggers off the bridge at the base of the downhill 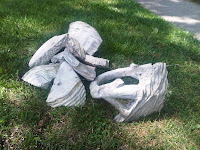 stumble from the bars. Without too fully indulging (the very short step to) stereotype, I would venture, like the UK, that the above examples were the handy work of a youthful group (remembering that a group is more than a single individual, for present purposes) of alienated, substance-altered (and thereby, disinhibited), ‘in the moment’ (read, uncalculating, unplanned) folk who quite possibly photographed and posted the proceeds of their stroll home on a pleasant Friday night.

Like the Dean (and countless other analysts), troubling as the behaviours themselves might have been, the task is first to understand and secondly to craft a ‘cure’, owning that riot and rebellion is as old as community itself. As is vandalism, almost by definition, an impulsive act in the presence of (disinhibited) opportunity. Much as the desire for vengeance and retaliation surges in the immediate discovery, I’m equally certain that the answer does not lie in secreting oneself in the bushes for countless nights thereafter, waiting to jump out and confront the perpetrators. (For one thing a sleep-deprived, sixty-four year old is not exactly a match for drunk teenagers!) Where our esteemed homilist and I diverge is not in the ‘spirit’ (if you will) of what we say – but in the vehicle. Mindless acts are exactly that. Mindless acts require a mindful solution.