At this time of year (aka, the Holiday Season -- and we are still in it 'til Jan. 6, aside trees at the curb and 'festive lights' a-dimmed), there's precious little acknowledgment of -- I might even say, tolerance for -- anything but 'good cheer'. Why then is it that, for some, almost nothing could be farther from what is being experienced? The season's professed zeitgeist is one of celebration, bon vivant, eager anticipation, hand-shaking, and smiling, merry this and happy that. The politically incorrect stance is, sadly (and I use the word advisedly) one of mounting stress, urgency, and, perhaps most tellingly, exclusion.

I had occasion to be chatting with my stepson recently as he was preparing his music for the upcoming advent / Christmas services. He made casual mention of the Blue Christmas mass and the challenge of finding music that he felt would reflect the intention of the gathering Although anyone can (and perhaps, should) attend, it's held for those folk who, for a variety of very good reasons, feel less than engaged in the season (somewhat reminiscent, if I allow a jaundiced thought, of those colonies of pariahs, outcasts, if you will) and finding some comfort in an assemblage of like minds and moods. Ultimately, he was careful to choose music that he felt set a quiet, contemplative tone. As we talked, I couldn't avoid recalling (probably because the lyrics are etched into my unconscious by sheer volume of exposure) the maudlin lyrics of 'Blue Christmas' that serve to underscore the very 'us and them' polarizing that happens around this time of year:

"You'll be doin all right, with your Christmas of white...
But I'll have a blue, blue, blue Christmas."
(Thanks, Elvis!)

My personal grump seems to have been a little more contained this year than in the few decades immediately past -- but still around (sufficient to invite the query from Nicola: 'did they beat you or something on Christmas Eve?'). No specific triggers (well, the Boxing Week feeding frenzy doesn't help, hard on the heels of mountains of now emptied boxes and bows cast aside, their sometime contents barely remembered these few days after) -- but surfacing nonetheless. Reduced daylight coincident with the season -- perhaps. The shortage of cash coupled with the 'need' to spend -- possibly. The excess, be it food, drink, or loot -- good candidates. The loss of the spiritual connection, the meaning of the celebration -- we've all heard that one to death.

But I think not sufficient perpetrators. What appears to be hugely amplified and accentuated is the gap, the disconnect between the surface demands of, expectations for the season (conviviality, hale-fellow well-met demeanour) and the logical, near-unavoidable consequences of the stressors that inevitably attend it (urgency, deadlines, hyper-socializing) -- a collision of what 'needs to be' and 'what is' -- underscored with each 'are you ready for Christmas yet?' before the date; the 'did you have a good Christmas?' for the week or so following. Welcome to Hotel California (such a lovely place, where you can check out anytime you like -- but you can never leave!) from which there is no apparent escape. 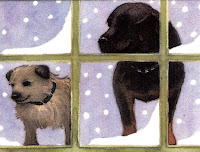 and just one West Highland Terrier) and it spoke to me. The rest of the card included a cat, sitting on the inside of the window, warm, content, and comfortable beside a fully-laden Christmas tree -- probably significant that I'd cropped that part out! How better to allegorically capture the poignant sense of separation, alienation than one species gazing at another, with a glass wall between; one on the outside looking in, the other caught up in, embraced by the 'prescribed surroundings', oblivious to its fellow creatures.

So what to do? Withdraw into anger, sadness, further isolating. Hunker down and wait it out. Alternately, suit up with the majority and participate -- authentically or not. The personal search has been for a less polarized place, less a 'hold my nose and jump' versus a pull back into sullen reticence. In the context of mindfulness practice, Jon Kabat-Zinn, in his introduction to his seminal book, offers a clue to what this spot might look like: Full Catastrophe Living. He describes seeking a concise title that would capture the unique approach that living mindfully represents, borrowing a line ultimately from the film Zorba the Greek. Asked if he'd ever been married, Zorba responds that of course he had, then adds: 'wife, kids, house, everything. . .the full catastrophe'. The reference, as Kabat-Zinn explains, is not that life had been so awful -- but that it embodies a full range of experience, the good with the ill, -- and most particularly that we don't get to cherry pick. The 'dance' is with the fullness of it all -- not just leap-frogging from one 'happy time' to the next.
Where this season is concerned, the dance unquestionably involves the individual's adoption of this more equanimous posture. Not necessarily 'selling out' to the pervasive (and just possibly contrived and forced) 'good cheer'; but allowing oneself into it, as possible and authentic. More than this, however, the culture itself is in need of an attitude adjustment. Inclusiveness requires that we embrace the 'other pole' -- not just the North, with all its presents, elves, and sugar plums; but the South, with its, just possibly sadness, sense of loss, alienation, and quiet reflection on what's been. The full catastrophe.
Posted by David Howard at 5:38 PM