Patience, Perfection, and an Excellent Cuppa


Let's make tea. A mug, a bag, some (sorta) hot water. Pour last into first and drag the middle one thru' it. Or. 'Hot the pot'; discard (water, not pot); place bag(s) in warmed pot and cover with freshly boiled water; wait a short while; then top up with appropriate quantity of boiled water; wait five minutes (or so), allowing a steeping, an infusion of; remove bag(s) and cover pot with cozy. What's the diff? Well, it depends. Tea is tea (well, even that's not a true statement). What it can and may become, however, is a function of the process, timing, intention, and . . . patience.

My waking conversation with my wife today (she'd been up for a few hours already!) began with an invitation to 'read this sentence': as it turns out, a rather long, grammatically complicated (but still quite precise and seemingly complete) comparison of terms for musical scale relationships; and how, despite the detail, each failed to specify the form of the scale so described. (Not unlike the sentence you just successfully navigated -- possibly.) There followed a re-reading, a pause, and then a three-word response: 'None articulates form'. 'Well, if that's all he's saying, why didn't he just say it!', came her somewhat exasperated retort. I couldn't answer that one. But it did remind me of my process -- in this instance, how I read. . . and a wealth of other awarenesses that tumbled out as the conversation continued.

As a middle school student, I'd been identified as a 'slow reader'. This pronouncement was attended by much parental hand-wringing, enrollment in speed-reading courses, psychological assessment, and angst and envy on the part of the young student. In particular I envied my friend who could 'read a book a night'; and wondered how this was possible. (He also earned much lower grades than I did -- but I think may have had a better social life.) He confided at one point that he 'skimmed', aka, read down the centre of a page and skipped dialogue, picking up the 'gist' of the page, chapter, and evidently, book. I, by significant contrast, read each sentence, complete with punctuation and sometimes just marveled at the elegance of the construction. Two very different strategies, approaches -- with quite different outcomes (both favourable and less so).

My fondness for mathematical logic and Latin seemed to spring from similar seed. A quirk of the latter's 'normal' sentence structure is the placement of the main verb (which also contains the implied subject of the sentence) at the very end of the sentence. Far be it from me to speculate that Roman orators were passive-aggressively trying to slow people down a bit and compel them to listen to the whole sentence -- right to the very end -- but it is one possibility! Maybe I was just born 2000 years too late.

But back to my wife's morning studies. The broader topic, once we got past the convoluted language, was a comparison of different styles of practice. (Hmm, some possible overlap with tea and textbooks?) The pro's and con's of 'sight-reading' music were under examination, the particular author describing, this time very clearly, the seductive appeal of sitting down at the keyboard, cracking open a previously unseen score, and in 'no time at all', tickling the ivories in a good approximation of the tangle of notes on the page. His cautions were framed in terms of some familiar, mindfulness-based concepts: breadth of awareness of and attention to the present moment, discipline, and an internalizing of and more complete appreciation and learning of what, in this case, is being practiced or 'studied' -- achieved only by a 'sitting with' and allowing the material 'to steep'.

He lauds the proficient sight reader for his unique skill. But there are significant 'downsides', if you will. He is always 'one step ahead of himself' (of necessity playing one bar or measure while attending to the next). He is committing a good amount of his energy to on-the-fly decisions about what to leave in, and what he can 'safely' leave out (and accordingly, figuring how to cover up those, truth be told, flaws in the performance). And he is completely foregoing the hallmark of building a piece into one's repertoire -- transferring the piece, not just into the momentary 'performance', but into 'muscle memory', able to be pulled out days, weeks, years later, often without benefit of the score before him. Sounds a whole lot like my friend's 'reading' of books, the quickie cuppa that passes for tea -- but misses the essence. I am reminded of the student who crams for an exam, successfully earns his 'A', then moves on, quickly tiring of 'that old stuff', yesterday's news; and craving ever 'new and interesting' material to sate the appetite for novelty -- impatient, easily bored, restless. 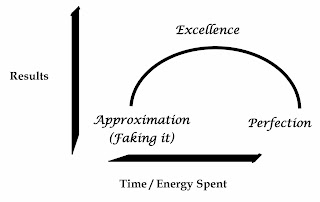 A last word on the 'other side of the mountain'. Like any good cup of tea (ruined if the bags are left in too long), any thorough reading of a book (themes and metaphor lost to obsessing over analysis, detail), the specter of perfection lurks at the other end of the road, threatening to paralyze and block progress of any kind. If the speed/sight reader flies over material, missing its nuances and subtleties, the perfectionist lingers too long, worries things to death, experiencing what the economists are so fond of calling 'diminished returns'. I find patience, excellence are often most constructively thought about as being plotted along a curving path rather than a straight line (that steadily rises, the more time and energy spent). At one end we have the 'faking of', the approximation; at the other the fixation of the stuck perfectionist. In the middle, we have excellence with performance and practice peaking midway between the two.
Posted by David Howard at 9:37 AM

Faking It With Enthusiasm.
Yours truly
The Sphincter of perfection
Gomer